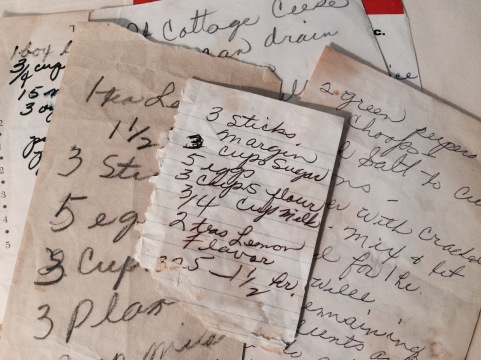 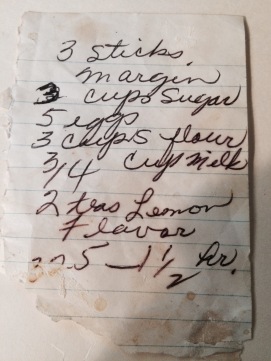 Nanny had a little chihuahua named Pup and instead of kibble, Pup got a pan grilled hamburger for lunch. This happened more days than not. Stating the obvious, Pup was chubby.

One of my earliest memories is breakfast at Nanny’s house. Nanny is my mom’s mom and she, Granddaddy Bill, and Pup lived just a couple of blocks from my preschool. Every day, mom would get me ready for school and instead of pulling together breakfast, we would leave early and stop by Nanny’s house for eggs, bacon, toast, grits, and the like. I’m not sure Nanny ever had a box of Pop-Tarts or Lucky Charms in her house. For a women who fried hamburgs for her dog, this is not surprising.

After the breakfast plates were cleared and cleaned, we were off to school and work and by 10am, Nanny had dinner – or supper, or whatever you call the evening meal – was on the stove. Lunch was an afterthought baloney and mustard sandwich, but dinner took time. Green beans need a good couple of hours steeping in fatback to be nice and southern soggy. Tomatoes have to stew. Lima beans need to be shelled. This was a average Tuesday. Or Thursday. Or every day.

My grandparents lived in a modest house on the unassuming side of town, but they ate like kings. Every meal had a meat, usually pan or chicken fried this or that, and a smattering of “vegetables,” keeping in mind that a vegetable to Nanny could be mac and cheese or rice and gravy. She never used a recipe. She always measured ingredients in the palm of her hand, if she measured at all. She was a sit-at-the-table-until-your-plate-is-clean type of lady. Read: you don’t have to like it, but you have to eat it. When standing at the crossroads of staying at the table with a bunch of no-fun adults or playing outside in the Carolina sun, you learn to eat broccoli casserole.

Because of her, because of how she cooked and loved us with her hours in the kitchen, I think my family sees food differently. Feeding people is a way to love them and this one truth was so subtlety woven into our family that it was easy to take for granted. Nanny cooked breakfast every morning because it was a way to love my mom who was juggling a job, a five year old, and a baby. Cooking was her way of acknowledging the days were at once long and never long enough. She couldn’t take away the burdens of the day, but she could love us in a way she knew well.

I think a lot about Nanny this time of year. Our family’s Christmas dinner consist almost solely of Nanny’s recipes – sweet potato casserole with marshmallows (no pecans, thank you), stuffing, the aforementioned broccoli casserole, her homemade mac and cheese. But what I remember most about the holidays were her cakes. There was red velvet cake, moist and in the most beautiful color. Hummingbird cake filled with banana and nuts. And there was always, always, pound cake. Her pound cake is the stuff of legend in our family. That humble pound cake, simple as it was, held it’s own alongside the more stately companions.

When Nanny died, our family found dozens of scrap pieces of paper. In her own hand on whatever was nearby at the time, Nanny would write down bits of recipes. Church bulletins, receipts, Cool Whip lids, all scribbled with notes and measurements. The tiny scrap of paper with her pound cake recipe remains one thing my family would grab out of the house in case of fire.

I’ve sat with those tiny scraps a million times over my life, wishing I could make sense of them all but overwhelmingly grateful to have them. I’ve handed them to my mom and asked what she thinks Nanny was trying to make with mayo, dried breadcrumbs and paprika. Mom would look at the scraps and fill in the gaps. That apple cake scrap of paper? Add oil to that recipe. Nanny always used oil in her apple cake. Or the Italian Cream Cheese cake? Nanny’s had coconut. She didn’t write that down, but always add coconut. Maybe it’s because they are written in her own hand or maybe it’s a way to remember her, but I treasure those scribbles almost more than anything in my life.

A couple of years ago, I decided to make Nanny’s pound cake as Christmas gifts. I asked mom if I could use Nanny’s dented, old bundt pan. There have no doubt been hundreds of pound cakes baked in that pan. It is beat up, thin, seasoned, probably the cheapest in the store, nothing fancy, but it was hers. With that well-used pan and tiny scrap of paper, I spent hours creaming butter and sugar, cracking eggs. I hope the people who got those pound cakes enjoyed them, but more than anything, I hope they felt well loved. I hope they could feel love rolling down through the generations from one incredible lady through the legacy she leaves behind. Pound cake, paper scraps and all.

Because this post would not be complete without it, here is Nanny’s pound cake recipe. It’s laughably simple, but still completely beautiful. I’ll let the little scrap of paper speak for itself. 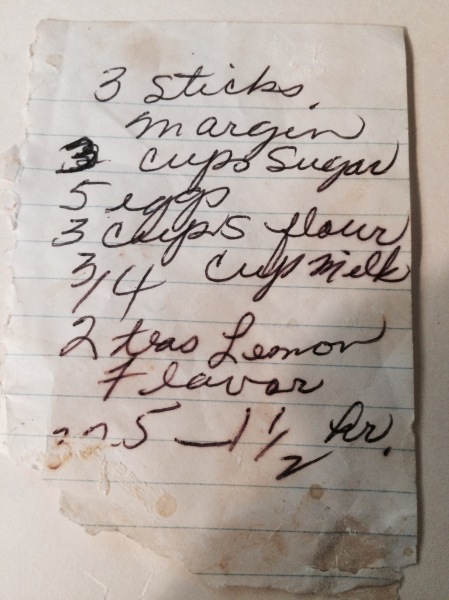